It is the Man Behind the Gun

Pakistani military planners had conceived the West to be the main theatre of 1971 War but the gains in Chamb, Hussainiwala and Fazilka turned out to be a measly sop for the loss of East Pakistan. Fierce resistance by Pakistani armour in Northern Punjab had stemmed a looming breach that threatened Shakargarh and Zafarwal, albeit at the cost of substantial territorial losses. In the Desert Sector, the Indian Army’s Southern Command had occupied vast tracts spread over 4,000 square miles. The stunned military junta was, therefore, desperate for a cease-fire, as the Pakistan Army valiantly tried to stave off Indian attempts at driving towards deeper strategic objectives. At this stage of the conflict, the PAF was still in the ring and on its feet. Close Air Support and Combat Air Patrols (CAP) over the battle area were being provided to the Army without any let up, till the curtain finally fell on 17th December.


On the last day of the war, two Sabres[1] led by Flt Lt Maqsood Amir of PAF’s No 18 Squadron took off from Sargodha, for a routine patrol over the battle area. The winter haze had not quite cleared up even by mid-day, so Maqsood asked the radar controller for a loiter height of 5,000 ft instead of the usual 1,000 ft, for better visibility. With his wingman Flt Lt Taloot Mirza in tow, Maqsood set up orbit around Pasrur, which was on the western edge of the battle area.

No 45 Squadron, equipped with MiG-21FL was based at Chandigarh. Just prior to the war, it had been split up into several detachments, one of which was deployed at Amritsar. A radar Surveillance Unit was also co-located at Amritsar and, given the proximity to the border, the Base was well poised for an instant response.

As expected, the reaction was swift when two MiG-21s scrambled to intercept the Sabre CAP. Sneaking in at low level, the MiGs were out of PAF’s radar cover but their VHF[2] radios were under surveillance. The IAF pilot-controller conversation was a good enough clue for the PAF controller, Sqn Ldr Rab Nawaz, to assess exactly what was going on. Carefully monitoring the radio calls of the ‘rats’ (code-word for MiG-21), he instructed Maqsood to fly at combat speed and keep a good lookout. The moment the MiG leader, Sqn Ldr Shankar, called ‘contact’ with the bogies, Nawaz instantly warned the Sabre pair that the threat was in the vicinity and they had better clear their tails.

As Maqsood threw in a left hand turn to look around, he was astonished to see two MiG-21s diving down at the Sabres from 8 o’clock, high position[3]. He recalls being struck by the aircrafts’ small delta wings and sleek, long fuselages; he also did not miss their desert camouflage, an oddity in the lush Punjab plains. The apparent toy model features of the MiGs, however, made a lethal transformation in front of Maqsood’s eyes when he saw a fiery streak shoot off from one of the aircraft!

Inducted in the IAF as an antidote to the PAF’s remarkable Starfighter, the MiG-21 was a far more manoeuvrable aircraft, with few aerodynamic vices. Compared to a Sabre, its small, heavily loaded wings were not suited for tight turning in the horizontal plane, but it had sufficient excess thrust to lift the fight into the vertical. Additionally, the MiG’s acceleration was impressive and, it could catch an adversary as fast as it could move out of its clutches. All things considered, the MiG-21 could fight on its own terms. The Sabre, on the other hand, had few options against a bi-sonic fighter. Happily, slow speed combat was the Sabre’s forte, thanks to a fine slatted wing[4]. Being able to force an overshoot was, thus, the name of the game.

With an adversary firing from the rear, the drill is to ‘break’ into it with maximum rate of turn, thus compounding the gun-tracking problem. Incredibly, Maqsood hesitated! Noticing that the MiG’s profile appeared somewhat frontal, he reckoned that enough lead was not being allowed. A good gun tracking solution would require the attacker to point ahead; this would consequently show more of the belly and lower wing surface to a defender. Concluding that he was out of harm’s way for the moment, Maqsood coolly settled for an energy-conserving hard turn. This would eventually make the MiGs hit a square corner as they ran out of turning room, he imagined.

What Maqsood did not know was that a K-13 missile had been launched and the flash that he had seen was not of cannon fire, really[5]. A missile launch would have required him to go for a maddening ‘break,’ leaving little energy for a fight back. Fortuitously, the hard turn had sufficed all the same; it not only defeated the early generation missile but also cramped the attackers for space.

Sensing an overshoot, Shankar eased up for a ‘yo-yo’ to give himself enough separation, before he swooped down again. A defender endowed with better acceleration could have escaped at this juncture, but knowing his Sabre’s limitations, Maqsood had to stay on and fight. Under the circumstances, a smart tactic was needed that could throw off the attackers. Maqsood picked the barrel roll from his repertoire. The comical-sounding manoeuvre was somewhat of a misnomer in the deadly world of air combat. While an essential of any aerobatics display, the barrel roll had turned the tables on an attacker in many a dogfight.

Basically, the roll involves a corkscrew flight path on the inside of an imaginary barrel. Since the aircraft flies in three dimensions during the process, the resultant forward motion is distributed or ‘vectored’ in the three planes. An unwary pursuer is thus not able to arrest his rapidly increasing rate of closure. This is exactly what happened to the two MiGs that zipped past, as Maqsood went through the complex motions of rolling, pitching and yawing, while ‘doing the barrel.’ 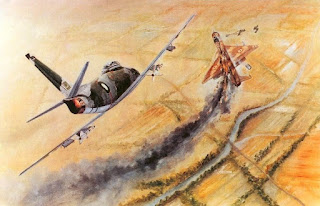 Recovering to level flight again, Maqsood was in a bit of a quandary whether to fire his six 0.5” Browning guns or the Sidewinder missiles. For the latter he had to wait some seconds, till the MiGs had opened up to an optimum range of several thousand feet. Suddenly, the trailing MiG turned hard to the left, apparently having noticed the Sabre behind. Maqsood did not let go of the opportunity; he placed his gunsight over the target, and started firing. The bullets seemed to land square behind the canopy and after just four seconds of firing, the aircraft started to trail thick black smoke. Maqsood noticed something fly out of the aircraft before it rolled over and dived into the ground in a big ball of fire. Perhaps it was the ejection seat that had shot out of the burning aircraft, but Maqsood was more concerned about his No 2 who was not visible in the rear quarters.

Having stuck around through the arduous manoeuvring as wingman, Taloot found it too tempting to let go of the other MiG in front and started chasing it. As expected, the chase was futile but in the process he split up with Maqsood. Luckily, the two re-joined with the assistance of the radar controller, who was interrupting his instructions with a relay of the disconsolate MiG leader’s calls. “Shortie has ejected,” Nawaz heard Shankar tell Amritsar, as he kept his ear to the VHF monitor. 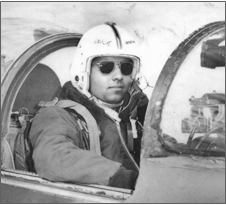 Flt Lt Tejwant Singh had ironically gone down to the Sabre, an aircraft that he had himself trained on during the Combat Crew Training Course done in USA in 1964. His friendship with some of the PAF pilots[6] during the course may also have been instructive in some ways, for to ‘know thy enemy’ is a familiar dictum of warfare. The superior performance of the MiG-21, versus the Sabre, was another factor of consequence in the dogfight. In the final analysis, however, it is the man behind the gun that makes the difference, as Maqsood demonstrated in this classic air battle. His skills were duly acknowledged with the award of a Tamgha-i-Jur’at.

Some years later, Maqsood decided to go back to the classroom, while a Wing Commander. Majoring in aerospace engineering as the only officer in a class full of cadets, he was the top graduate and won the University’s[7] prestigious gold medal. Having demonstrated his expertise with both ‘the sword and the pen,’ Maqsood is well qualified to judge what it takes to be a successful fighter pilot. Air combat is a mind-game,” asserts Maqsood, profoundly. “An analytical mind, together with sharp reflexes can carry the day – a superior machine not withstanding.”

[1] The version flown by No 18 Squadron was the Canadair Sabre Mk-6 (known as F-86E in PAF).
[2] The IAF used Very High Frequency (VHF) while the PAF used Ultra High Frequency (UHF) for radio communications.
[3] The MiGs had ‘blown through’ the Sabre formation head-on, without having been observed. Subsequently, the MiGs got behind the Sabres through a low-to-high conversion.
[4] The ‘slats’ on the leading edge of the Sabre’s wings drooped down at slow speeds and allowed air to rush through the narrow slot that was consequently created; this fast moving air passed over the wings and re-energised the turbulent airflow, thus delaying the onset of stall.
[5] The IAF MiG-21s were usually configured with two K-13 missiles and a centre-line drop tank each, the latter replacing the optional 23mm belly gun pack.
[6] 2nd Lts M Arshad Choudhry and Salim Baig Mirza were Tejwant’s course-mates at Nellis AFB, USA. In a twist of fate, Baig was there to cheer up Tejwant when the latter was in custody as a POW in Rawalpindi. Maqsood Amir also briefly met his victim during the latter’s transit to the POW camp.
[7] PAF’s College of Aeronautical Engineering was then affiliated to the NED University of Science and Technology, Karachi.

Thank you for your interesting and informative blog. I have enjoyed reading it and appreciate the work you have put into it. Here is some relevant information for you to review .
military toy guns

Beautiful...
Enjoyed reading it. I liked the explanation.
Shows the how critical, intelligent and well trained are our defenders.
Long live PAF!