The Indian Army had responded vigorously to Pakistani infiltration of irregular forces into Kashmir which had started in August 1965. With a double pincer on Badori bulge, the Indians had captured the strategic Haji Pir Pass. Core areas in Azad (liberated) Kashmir including towns of Muzaffarabad and Mirpur lay threatened. The only way out of this critical situation was to launch a diversionary manoeuvre; the Pakistan Army therefore put into motion a well-considered plan to capture Chamb and subsequently, Akhnur. Capture of Akhnur Bridge on River Chenab would have snapped land communication over the vitally important Jammu-Srinagar road, thereby isolating Indian forces in Kashmir.


Operation ‘Grand Slam’ was thus launched in the early hours of 1st September 1965. Audacious as the plan was, it took the Indians by complete surprise. A Pak Army force consisting of an infantry division and two armoured regiments, along with extensive artillery support, started the attack on Indian positions. Outnumbered and out-gunned, Brig Man Mohan Singh, Commander 191 Infantry Brigade, was faced with a critical situation and he frantically called for air support. By the time the request got an ultimate approval from the Ministry of Defence in Delhi, it was late in the afternoon.

Pathankot was the nearest airbase in the zone of conflict. It housed three squadrons including two with Mystère IVs – Nos 3 and 31 – and one with Vampires – No 45. Under command of an enthusiastic and energetic Sqn Ldr Sudesh K Dahar, No 45 Squadron had recently moved from Pune in anticipation of the hostilities. The Vampires had been armed and waiting on the tarmac since morning. Three missions had been planned and on receipt of orders, the first formation of four aircraft took off at 1650 hrs (PST) with Dahar leading.

The grim situation on the ground found the Vampires at work immediately. Much has been made of their success by the IAF, but Maj Gen G S Sandhu was not impressed; in his book History of Indian Cavalry, he recounts how the first Vampire strike of four “leisurely proceeded to destroy three AMX-13 tanks of India’s own 20 Lancers, plus the only recovery vehicle and the only ammunition vehicle available during this hard-pressed fight. The second flight attacked Indian infantry and gun positions, blowing up several ammunition vehicles.” 3 Mahar is also said to have shared the ignominy at the hands of IAF. Any pretension as to the success of Dahar’s mission was quashed when Flt Lt S V Pathak was hit by ground fire [1]. He however managed to stagger across to friendly territory before carrying out a remarkable bail-out, as the early vintage Vampires were not equipped with ejection seats.

At Sargodha, the main PAF airbase, Air Defence Alert duties were being shared by different F-86 Sabre squadrons. The exuberance and excitement of the pilots was exemplified by nobody better than Flt Lt Imtiaz A Bhatti of No 15 Squadron who, having completed his 0400-1200 hrs shift, pleaded to stay on for the second half, hoping to get an opportunity of flying a coveted combat sortie. With him on alert was PAF’s highly regarded and popular Sqn Ldr Sarfaraz Ahmad Rafiqui, the Squadron Commander of No 5 Squadron. Rafiqui’s happy-go-lucky style belied a thoroughly sound professional standing amongst PAF’s elite group of pilots. A gifted flier, he had bagged the ‘Atcherly Trophy’ for the Best Pilot as a cadet in the Flying College at Risalpur. He continued with a string of above average reports in his Advanced Flying Course as well as the Fighter Weapons Instructors’ Course, both done in USA. He again showed his prowess as a superb fighter pilot by topping the course at PAF’s Fighter Leaders’ School. After yet another course at RAF’s prestigious Fighter Combat School, he ended up piling a unique assortment of highly rated qualifications that served him (and the PAF) in good stead. As an exchange pilot in UK, he flew Hunters for two years. His credentials looked good; it remained to be seen if he was equally impressive in actual combat.

As the pilots ‘scrambled’ in response to the buzz on Sargodha hot line shortly before 1700 hrs (PST), it seemed certain that Rafiqui’s flair and Bhatti’s fervor [2] would come together in a lethal combination. Within minutes, the Sabres took-off and were directed by Sakesar radar to head 060º and climb to an altitude of 20,000 ft or ‘Angels 20’, in radar jargon. Reaching the area, the radar controller set them up in a racetrack pattern in Sialkot-Chamb direction, ten miles from the border. It wasn’t long before they were ‘vectored’ to Chamb, where the second formation of four Vampires led by Flt Lt A K Bhagwagar was busy in the fray. The Sabres descended and started a visual search not only for the attacking aircraft, but also for the PAF C-in-C who was reported to be making an on-site assessment of the battle in a T-37. To say that consequences of fratricide would have been grave would be an under-statement!

Bhatti was the first to spot two Vampires crossing 3-4,000 ft underneath and the sooner he informed his leader, Rafiqui immediately acknowledged, “Contact, going for them.” Bhatti set about clearing tails while Rafiqui stalked his prey. Just then, Bhatti spotted two more aircraft a mile away, which he mistook for Canberras in the glare of the low evening sun; in fact these were Vampires from Dahar’s formation on the way out after completing their mission. As Bhatti was about to seek his leader’s permission to go for the pair, he saw another two Vampires trying to get behind Rafiqui. Almost instinctively, Bhatti broke off, positioned behind these two and in no time had one of them in his gunsight; but before Bhatti could shoot, he had to have Rafiqui out of his line of fire. 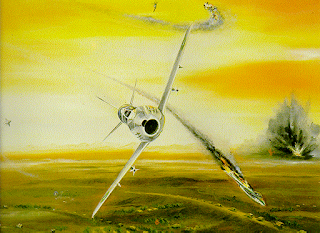 Rafiqui had, meanwhile, despatched one of the Vampires with a blazing volley from the lethal 0.5” Browning six-shooter (actually six guns) and was chasing the other. At this stage, the Vampire on whom Bhatti had trained his guns was closing in on Rafiqui and the situation was getting perilous. “Break left,” yelled Bhatti, but Rafiqui managed to make short work of the second one before reacting just in time. Rafiqui then readjusted on the wing of Bhatti who got busy with his quarry. While Rafiqui cleared tails, Bhatti did an equally fast trigger job. One Vampire nosed over into the ground, which was not too far below; the other, smoking and badly damaged, ducked into the trees. Its bewildered pilot, Flg Off Sondhi, staggered back to tell the horrifying tale. The less fortunate Flt Lts A K Bhagwagar, V M Joshi and S Bharadwaj went down with their Vampires in full view of the horrified Indian troops.

Also watching the dogfight was Pakistani Brig Amjad Choudhry, Commander Corps Artillery. He reminisced in his book September ’65 – Before and After, “When we saw the bombers from our command post, we were apprehensive because our tanks and infantry surrounding Chamb were in the open, in close formations and were very vulnerable to air attack. The bombers went into action and came low to drop their bombs. Before they could do much damage, there was a flash in the air on top of these bombers and before we could comprehend what had happened, the Indian bombers came down in three columns of smoke.” Suggestion of Divine intervention aside, Choudhry correctly mentions the number of Vampires that fell in the dogfight, an issue that has been mired in some confusion over the years.

Back at Pathankot, the first three Vampires landed, then a singleton came in and finally, another four Vampires landed. Those on the ground thought that the lone Vampire was actually a straggler from the first formation, the four Vampires were of the second formation and, four more were yet to come. When Flt Lt Farokh J Mehta and his wingmen removed their oxygen masks, the Engineering Officer was shocked to discover that three of the second formation were missing. “He had this horrified look on his face,” Mehta recollected. Providentially, Mehta had changed places with Bhagwagar on the latter’s request, being the more experienced to lead the last formation in poor lighting conditions. He ruefully remembered how a badly shaken Sondhi narrated details of the dogfight to the crest-fallen squadron mates.

When Air Marshal M Nur Khan, who had landed at Sargodha after his recce sortie, summoned Rafiqui and Bhatti, nobody was sure if it was for a dressing down for starting an air war. Shoot-to-kill orders had not yet been issued and Rafiqui felt somewhat apprehensive, though he re-assured Bhatti that he alone would take the flak from the C-in-C. “Well done my boys,” was the reply from the man who was never in doubt about how the PAF should have responded.

This single engagement resulted in a windfall of strategic dimensions for the PAF. The shocked and demoralised IAF immediately withdrew over 80 Vampires, together with 50 Ouragons, from front-line service. The IAF was effectively reduced in combat strength by nearly 30% in one deadly stroke, thanks to Rafiqui and Bhatti’s marksmanship. Both were awarded a Sitara-i-Jur’at each. As for Sqn Ldr Dahar, he made up for his dampened enthusiasm with a display of considerable fortitude; it earned him a consolation Vir Chakra .

[1] Pathak is suspected to have been shot down by his own troops who were attacked by the first formation. Pak Army’s 29th Light Anti Aircraft Regt deployed in the Chamb Sector did not claim any aircraft for 1st Sep ‘65, according to Unit records.
[2] Bhatti ended the war with 34 combat missions to his credit, the maximum flown by any PAF pilot.

This article set record straight about the incidence,fourth vampire was shot down by indian army themselves.

Sir, Your opinion of Dahar is that he was given VrC as consolation prize

Abhi, you guessed it right. It does not make sense to award a VrC to a Squadron Commander under whose watch four Vampires were lost in the very first encounter, besides causing fratricide to own Army Units (20 Lancers & 3 Mahar).

Sir Kaiser..I m always short of words when i want to appreciate your write ups. Your articles are well researched before putting on the blog ..over the years i have observed that you are always well prepared to answer any query raised by the reader. I must say you stand tall amongst the best writers in the world. PAF must give you the responsibility of leading a think tank
...
My regards