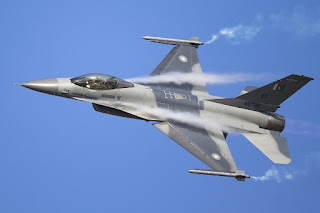 A fighter is a flying machine designed to shoot down enemy aircraft, besides performing many other ground attack roles. Depending on the threat to be countered, the operating environment and the weapons available, the capabilities of a fighter vary widely. Trade-offs are made in several areas, the more prominent ones being performance and manoeuvrability. Each fighter is, therefore, a compromise, but with certain qualities emphasised in order to best fulfil the primary task for which it has been designed.

Aircraft performance includes parameters like rate of climb, ceiling, acceleration and speed which play a significant part in the interception of an adversary; the latter two parameters can also help in rapidly extricating out of a thorny situation. As would be expected, unbeatable aircraft performance is dependent on good design, and availability of excess energy. Thrust produced by the engine can be a convenient index of available energy; however, when an aircraft is considered as a mass acting under the force of gravity, a simple reading of engine thrust values can be misleading. ‘Thrust-to-weight (T-W) ratio’ is the factor that helps appraise aircraft performance in a correct perspective. Besides enhancing basic performance parameters, a high T-W ratio also helps sustain turn rates by countering the effects of drag induced during manoeuvring flight.

Higher thrust is, of course, produced by paying the penalty of higher fuel consumption. Sufficient on-board fuel quantity can thus be seen as an important factor if aircraft performance is to be fully exploited. ‘Fuel fraction’ is a term used to denote the internal fuel as a fraction of aircraft weight in the clean configuration. It gives an idea of the staying power in a dogfight, assuming that fuel consumption rates of different engines are largely similar. A fuel fraction of less than .25 for afterburning turbojet fighters and .20 for non-afterburning ones is considered inadequate.

Manoeuvrability, or the ability to out-turn an opponent is an important attribute of a fighter. Turning is measured both in terms of radius of turn as well as rate of turn. A good radius of turn is a ‘nice to have’ feature, but an attacker rarely needs to turn as tightly as his adversary to maintain a favourable position in a stern attack, unless at very close ranges. A defender, on the other hand, needs to swing his tail away from an attacker’s flight path as fast as possible by generating a high rate of turn. Thus in a turning fight, rate of turn is of greater significance than radius of turn.

Turning ability is dependent on wing design, and the easiest understood feature is ‘wing loading’ or the weight of the aircraft per unit area of the wing (which is the source of most of the aircraft lift). During a turn, when banked flight tilts the lift vector away from the normal, and drag wrecks whatever remains of the angled lift, a low wing loading helps balance the essential lift-weight equation. Low wing loading is thus advantageous to an aircraft turning for a smaller radius, as well as a higher rate of turn, at any given speed. At very low speeds, however, when an aircraft is on the verge of stalling, devices like slats and flaps preserve/generate much needed lift; in such speed regimes low wing loading does not help matters much.

Creating lift in an aircraft incurs an unavoidable penalty in the form of induced drag. Aerodynamic efficiency is achieved by designing a wing that produces maximum lift for the least drag. This is done by having a high ‘aspect ratio,’ which is the ratio of the square of the wingspan to the wing area. Since induced drag happens to be inversely proportional to the aspect ratio, greater the wingspan, lower the induced drag. A high aspect ratio is thus an important factor in combat, as it helps in sustaining turn rates. A good combination for manoeuvrability would, thus, be low wing loading for enhanced turning ability, along with a high aspect ratio to help sustain it. (High aspect ratio also improves endurance and ceiling, and shortens take-off/landing distances.)

As fighters become faster, their aspect ratios have to be reduced to minimise supersonic wave drag. This is done by presenting a smaller frontal area to the supersonic airflow with the help of a smaller wingspan, besides other profile streamlining techniques. It can thus be seen that the conflicting requirements of high-speed flight and subsonic manoeuvring flight have a bearing on aspect ratio, and compromises invariably result.

Very good introduction of fighter in a well-knit short article for any lay man. I’m desperate to meet you sir. God bless!!!

Excellent. So how does the JF-17 measure up on all these metrics? And how much of an improvement do you expect in the Block III? Will its wing loading (which is kind of high) go down, with an increase in composite materials? Also, is Wing Loading and Rate of Turn even relevant for a fighter with High Off-Boresight WVRAAMs anymore? etc.

The core modification on the JF-17-III will be the AESA radar. Besides, it will feature a Helmet Mounted Sight, a three-axis fly-by-wire flight control system (presently it is pitch only), and an additional sensor station under the intake. As for Wing Loading, both the F-16A and JF-17 even out at 67 lbs/ft2 at 50% internal fuel, while both have a Thrust-Weight Ratio of 1:1 at combat weight. Yes, these metrics are becoming less relevant in BVR and off-bore-sight WVR scenarios.
PS: The Thunder can snuff Tejas anytime.

Thank you sir for that follow up. The AESA will definitely be the centerpiece and a huge upgrade for our fleet. But I am very happy that the actual TWR and Wing Loading are on par with the Viper-A, and hopefully will improve further with an upgraded powerplant, which is expected in the Block III =)
Thanks again
~Mohsin