Faced with unexpectedly stiff resistance from Pakistan Army, the Indian offensive launched on 6th September 1965 in the Lahore-Kasur sector had floundered badly. Having failed to capture the vital bridges on BRB[1] Canal, XI Corps formations were unfavourably poised for further offensive operations towards Lahore. On a similar note, though Pakistan Army’s counter-offensive spearheaded by 1 Armoured Division had resulted in the capture of Khem Karan, further advance had been checked by Indian forces. For either side, the only prospect of a breakthrough under these stalemated conditions lay in meaningful intervention from the air. Control of the air was, therefore, vital for unhindered air support to land operations.

Relentless battering by the PAF had left the IAF mauled in the battle for air superiority. Having suffered several times more aircraft losses at the hands of an air force that was much smaller, the mood in the IAF was unquestionably distraught. PAF pilots thus found it opportune to fly Combat Air Patrols (CAP) with impunity, to the extent of setting up station on the border and, sometimes even inside enemy territory.

On the afternoon of 20th September, four Sabres took off from Sargodha for the usual CAP along Lahore-Kasur axis. The formation consisted of a motley of pilots – crème de la crème of different Units. The leader of the formation was Sqn Ldr Sharbat Ali Changazi, whose Mongol lineage was as conspicuous as it was daunting. He had managed to pull strings to be relieved from liaison duties with the Army and, had been attached to the Base a few days after the outbreak of the war. Entering the cockpit after months of medical unfitness following a scooter accident, Changazi was rearing for a clash in the air. His wingman (No 2) was Flt Lt Anwaar-ul-haq Malik of No 5 Squadron, who had shot down a Mystère[2] on 7th September. Earning him the admiration and envy of his formation members, this achievement also gave Malik an air of unbridled confidence. The Deputy Leader (No 3) was Flt Lt Nazir Jilani, one of the Flight Commanders of No 11 Sqn. Flt Lt Amanullah, who was undergoing training on F-104s at the outbreak of war and had just switched back to F-86s, completed the formation as No 4.

Climbing to 20,000 ft, the Sabres headed southeast towards Kasur. The haze was bad and they could not see much of the ground. The sooner they had set up orbit, Sakesar radar warned them of IAF’s prompt reaction. “Four bogies climbing well inside enemy territory, heading north,” called the radar controller, racing everyone’s pulse.

The IAF had been working at ways to snare the Sabre CAPs for some time and, it was thought that a ‘mixed bag’ fighter sweep would do the trick. This time around, two Hunters and two Gnats were scrambled from Halwara. Sqn Ldr D P Chatterjee led No 7 Squadron’s Hunters, with Flt Lt S K Sharma as his wingman. Flt Lt A K Mazumdar and Flg Off K C Khanna formed the Gnat pair from No 2 Squadron.

Luck seemed to be in short supply as events unfolded for the sweep aircraft. Amritsar radar announced that it had lost the enemy blips on the radar scope, but directed the fighters to continue towards Amritsar and then head west. Arriving over Lahore, they found no trace of the Sabres, which was not surprising, given the poor visibility. Over enemy territory and clueless about where the blow would come from, was not the recommended method of flying a sweep mission. Worse, the Hunters and Gnats lost mutual contact too, and the pairs were on their own.

When the Sabres reached Lahore they had a dependable ground radar scanning through the hazy sky. A tight cross-cover formation also helped keep a double check on their tails as the Sabres circled over the historic city. Lahorites had earlier seen the Sabres in action on the morning of the Indian attack when No 19 Squadron had administered a classic work over to the armoured columns that threatened their city. Now, with the air situation again in control, Lahorites were ready for an encore.

During the orbit over Lahore, Amanullah spotted a couple of specks through the haze. “Two bandits about 5,000 ft below, 11 o’clock,” he warned. The sooner this call was heard, drop tanks were jettisoned and master firing switches armed, almost as reflex actions. Moments later, the specks transformed into silhouettes of two Hunters. Jilani and Amanullah, who were closer, peeled off to dive after them. In the meantime, Changazi and Malik spotted a Hunter, which they presumed to be part of another pair that had perhaps sneaked in. Actually, it was Chatterjee who had split from his wingman during the defensive turn and, Changazi was only too pleased to tackle a singleton. Thus, within seconds of the encounter, two pockets of clashing fighters emerged – each with two Sabres jostling a Hunter.

Lahorites’ boundless passion for kite-flying, including an almost frenzied desire to bring down any other contender’s kite, has few parallels in leisurely sport. ‘Capturing’ a falling kite from the sky is considered akin to scalping and the loud-throated jeers that follow, signal bloody victory. With such zest for aerial frolics, it was no surprise that the people of Lahore thronged the roof tops when they heard the roar of jets overhead. 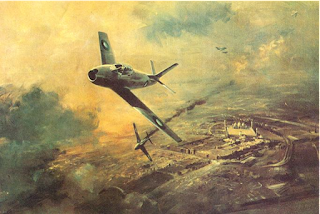 Changazi was the first to get his gunsight on the Hunter after out-manoeuvring it, despite a hung drop tank. After two short bursts from the Sabre’s guns the Hunter started emitting smoke, but desperate evasive manoeuvring continued for a while. Malik continued with a banter, which included a running commentary on what was going on; he noted with anxiety that the Hunter was still thrashing about despite his Leader’s relentless barrage. Changazi’s jugglery with the rudder finally offset the skid on the asymmetrically configured Sabre and, a volley landed squarely on his victim’s fuselage. The Hunter straightened out and fell into a listless dive, trailing thick black smoke. Chatterjee was apparently incapacitated as his aircraft plunged to the ground in Lahore’s Manawan locale[3], in full view of thousands of on-lookers.

The dramatic encounter got Malik so captivated that he forgot about ground control’s original report of four bogeys. The hitherto unseen Gnat pair had been lurking around, hoping for a chance pick-up on the Sabres. Majumdar and Khanna were doubly lucky, for not only had they caught the flash of the dogfighting aircraft, they were able to sneak behind the Sabres unnoticed. Changazi got an inkling of trouble when he heard the unmistakable noise of cannon-fire as bullets whizzed past his canopy. Aghast that the Gnats had closed in to firing range, he broke into a defensive turn. More appalling, however, his wingman was nowhere to be seen. Repeated calls to Malik went unanswered, though Jilani and Amanullah could be heard engaged with the other Hunter.

Prolonged absence from the cockpit had not dulled Changazi one bit, for he managed to shake off the agile little Gnats with ease. That, however, was hardly comforting; for the loss of his wingman had taken the sheen off his Hunter kill. Malik had, in fact, taken 30mm hits from Majumdar’s Gnat and his right wing and fuselage had been shattered, causing him to teeter on the verge of a spin. With his panels rattling, radio lost and cockpit full of smoke fumes, he desperately tried to stay aloft but to no avail. He was lucky enough to nurse the stricken aircraft away from the border and managed to eject over Lahore’s Harbanspura area; he was picked up without any major injury.

To the Lahorites, the thrill of watching aircraft come down like kites was almost juvenile. Oblivious of the identities of downed aircraft, they proclaimed spontaneous victory with their celebrated hoots. ‘Bo Kaata[4]’ was the refrain of the day, signalling another fallen kite. There were so many aircraft pirouetting in the skies, it seemed like a re-enactment of the annual kite-flying festival heralding the onset of Basant[5].

Jilani and Amanullah had, in the meantime, been engaged with the Hunter flown by Sharma. While they were turning to get him, another Hunter had fired from behind, causing Amanullah to break away viciously. With eight aircraft milling around, it was hard to tell exactly what was going on. Evidence, however, seems to suggest that it was Chatterjee who had tried a pot shot at Amanullah’s Sabre, before getting embroiled with Changazi. Furthermore, once the Gnats were through with downing Malik’s Sabre, they promptly rallied around a beleaguered Sharma who had tenaciously held off the attackers for quite a while.

The dogfight had now developed exactly on the lines of the just concluded one. Jilani had thus to act fast to shoot the Hunter or else, expect bullets from the Gnats’ cannon to whiz past any time. Happily for Jilani, the combat had degenerated to the slow speed regime where the Sabre excelled. Manoeuvring with well-honed skills, Jilani managed to place his gunsight on the Hunter’s fuselage and let loose a volley. The Hunter started to spew smoke but Sharma was able to nurse his stricken aircraft into friendly territory before ejecting near Katron. 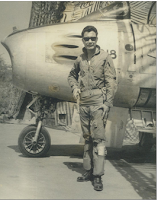 The thrilling dogfight over the skies of Lahore was an apt finale to PAF’s splendid performance in the battle for air superiority. The 2-1 tally in PAF’s favour was gratifying indeed; however, the whole formation had to pay for Malik’s downing as none of the scoring pilots was rewarded for gallantry. The concept of group retribution had been stretched a bit far, but nevertheless, it did signify PAF’s regard for teamwork rather than individual glory. On the IAF’s side, Flt Lt Ajoy Kumar Mazumdar was awarded a well-deserved Vir Chakra for shooting down a Sabre. However, the downing of No 7 Squadron’s two Hunters added upto an atrocious total of eight aircraft lost in air combat, which was 50% of the Unit’s inventory. The fact that this was more than the entire PAF’s air combat losses[6], rightly established Lahorites’ victory cry as no rude jeer.

_________________________[1] Bambanwala-Ravi-Bedian Link Canal.
[2] Malik shot down a Mystère-IVA flown by Flt Lt Babul Guha near Sargodha.
[3] The wreckage, along with the remains of the pilot were found near West Pakistan Textile Mills, located in the precincts of Manawan Police Station.
[4] Difficult to translate, the closest connotation would be, ‘there goes!’ More literally, it might mean, ‘there, it’s been cut.’
[5] Derived from ‘vasanta,’ the spring season of ancient Hindu calendar.
[6] During the 1965 Indo-Pak War, PAF lost 7 aircraft in aerial engagements against IAF’s 16.

Sir, With due respect, post reading your air War documentation it seems IAF is a totally useless and unskilled herd as compared to Ace PAF

Abhi...we have never underestimated the IAF. If I were to sum up the comparative war performance with some telling statistics, here goes:

1. In 1965, the IAF's Attrition Rate (loss per 100 sorties flown) was 1.67 vs PAF's 0.7. Clearly the IAF got beaten more than twice over (which gets me wondering why the C-in-C Arjun Singh was granted the honorary rank of Marshal of the Air Force some decades later).

2. In 1971, the Attrition Rate of both the IAF and the PAF was 0.91, which is a draw of sorts, not withstanding the ignominious defeat suffered by Pakistan, as well as the loss of East Pakistan.