A Hard Nut to Crack


The much-awaited II Corps offensive on the Western Front got overtaken by events as the 1971 Indo-Pak War headed for a mortifying finale for Pakistan. PAF had been conserving its assets for the all-important battle, which was not to be. Enough pressure was, however, maintained to tie down IAF effort for air defence, as also to demonstrate an offensive resolve. Continual attacks on the forward airfields of Amritsar, Pathankot and Srinagar, were thus part of a carefully considered strategy. In the event, an Indian Army two-pronged offensive in Shakargarh sector had rendered neutralisation of these airfields most crucial.

No 26 Squadron, based at Peshawar, had been assigned to take care of Srinagar airfield. Daily attacks by Sabres had been causing some damage, but the runway repair gangs were ensuring that the airfield was not out of permanent service[1]. The morning of 14th December saw yet another bombing raid led by the Squadron Commander, Wg Cdr Sharbat Ali Changazi. Accompanying him were Flt Lts H K Dotani, Amjad Andrabi and Maroof Mir, whose Sabres were armed with two 500 lbs bombs each. Escorting the 4-ship package were Flt Lts Salim Baig Mirza and Rahim Yusufzai. Altogether it was a formidable force and, given the familiarity with Srinagar, it seemed like it would be another milk run.

After a 25-minute flight through the picturesque hills and vales of western Kashmir, Changazi’s commanding voice broke the radio silence, “Leader pulling up, contact with the target.” The time was 0730 hrs (PST). Dotani, Andrabi and Mir followed at short intervals, none missing the easily visible airfield complex. Popping up to 5,000 ft above ground, they dived one by one to release their bombs on the runway. Baig and Yusufzai loosened into an orbit overhead the airfield, looking out for any interceptors through the relentless Anti-Aircraft Artillery barrage.

Flg Off Nirmal Jit Singh Sekhon of No 18 Squadron was rolling for take-off as No 2 in a two-Gnat formation, just as the first bombs were falling on the runway. Said to have been delayed due to dust kicked up by the preceding Gnat, Sekhon lost no time in singling out the first Sabre pair, which was re-forming after the bombing run. Changazi was, however, quick to detect the attacker behind his wingman. “Gnat behind, all punch tanks,” yelled Changazi. No 3 (Andrabi), who was just pulling out of the attack, was horrified to see the Gnat no more than 1,000 ft and firing at Dotani. “Break left,” called Andrabi, as he himself manoeuvred to get behind the Gnat. Dotani, who had been turning frantically, found his low-powered Sabre tottering at the verge of stall[2]. Unable to hang around any longer with such a precarious energy state, he decided to make a getaway. No 4 (Mir) in the meantime had completed his bombing run and, having no visual contact with the rest, decided to head home as well. The Gnat Leader, Flt Lt Ghuman, had also lost visual with his wingman just after take-off. Said to have failed in re-establishing contact, Ghuman remained out of the fight leaving Sekhon to handle the muddle all by himself.

The fight had turned into a classic tail chase, with a Sabre followed by a Gnat, which in turn was followed by another Sabre. “I am getting behind one but the other is getting an edge on me,” is how Sekhon had described the situation to his controllers. With two more free fighters watching over, the lone Gnat was practically up against four Sabres. Andrabi had, by now, closed in behind the Gnat’s rear quarters and was firing steadily. He was sure that he would get the Gnat, he excitedly forecast on the radio. His Sabre was incessantly spewing out a stream of 0.5” bullets but, despite good aim and textbook range, remained off the mark. What should have been a quick kill dragged on clumsily, testing everyone’s patience and nerves.

The Sabre had enough firepower to riddle a whole formation with bullets, so everyone was dumb-founded when Andrabi’s voice crackled on the radio, “Three is Winchester!” It meant that he had exhausted 1,800 rounds and his guns had stopped firing. The Gnat was still turning circles and it seemed that unless help came fast, Andrabi would soon be at the receiving end.

Changazi was carefully monitoring the dogfight while looking out for the elusive Gnat Leader, whose fleeting glimpse he had caught a while ago[3]. On hearing that Andrabi was spent, Changazi called him to join up as his wingman. Dislodging himself from the Gnat’s tail, Andrabi dutifully moved towards his leader. As the two were forming up, Sekhon took advantage of the slack, straightened out and jettisoned the drop tanks. In the flurry of activity, Sekhon had overlooked a vitally important step and, it was just as well that he shed dead weight for the next round. Nimbler than before, the Gnat could be seen to turn ever more tight as it started to catch up onto Changazi and Andrabi’s pair. Perched on top, the escorts watched in astonishment as the Gnat snatched degrees at a dizzying rate. The situation was getting stickier by the minute and in a couple of turns the Gnat was in a menacing position.

Silver-tongued and gravel-voiced, Andrabi was a class unto himself when he took to the radio. A smattering of expletives ensured that his calls were never disregarded even in the toughest of air combat manoeuvres. Thus, when Andrabi shouted for help against the attacker whose lineage he had declared suspect, everyone took notice! The escorts instantly dived down to grapple with Sekhon, who had turned out to be a hard nut to crack. While Yusufzai covered up as wingman, Baig easily manoeuvred to get behind the Gnat, much to everyone’s relief.

Baig had the privilege of opening his Squadron’s account by shooting down a Hunter near Peshawar, ten days earlier[4]. Since then, he had been in the thick of action in almost every sortie that he went up for. This experience, coupled with his unflappable personality, came in handy as Baig calmly positioned his pipper on the canopy of the Gnat and opened fire. Less than three seconds later the Gnat started to spew thick black smoke. Baig knew it was all over so he stopped firing and watched for the next move. 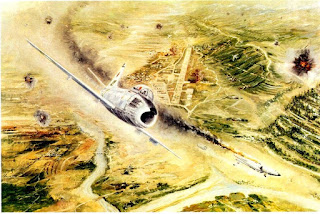 Meanwhile, the Base Commander and some senior pilots who were in the Air Traffic Control tower to monitor the dogfight, heard Sekhon’s frantic call to his leader, “I think I have been hit. Ghuman, come and get them.” With the mission leader still nowhere to be seen, the baffled ground supervisors tried to help Sekhon with the emergency but to no avail. Baig, who was following behind, saw the Gnat level its wings and head for the airfield, as if to indicate that for him the fight was over. Suddenly, the Gnat went inverted as it dove down uncontrollably from very low height. In all likelihood, the aircraft’s flight control system had failed. Sekhon attempted a last minute ejection as his canopy was seen to fly off, but the height was too low for the ejection system to function fully. The wreckage of the Gnat was found in a gorge, a few miles from the Base.

As the Sabres were reforming for recovery, Andrabi was surprised to notice that his left drop tank was still there, while the right one was gone. The aircraft was skidding to one side, something that he had not felt during the heat of the battle. He now reckoned a bit late why the bullets had not found their mark. Much to everyone’s relief though, Baig had saved the day and the formation made it back to Peshawar, unscathed[5]. Baig’s kill, however, did not get duly noticed, as the mission was seen to be a close call by the Air Staff at the PAF Headquarters. His citation for gallant action thus only made it to the ‘Mentioned in Despatches’ category. An award not withstanding, Baig is highly regarded in the PAF for belonging to the elite club of fighter pilots with multiple kills.

Sekhon, on the other hand, was posthumously awarded the Param Vir Chakra, India’s highest award for wartime gallantry and the only one received by an airman. His was a commendable effort indeed, as he had kept the field single-handedly to the very end.
_________________________

[1] An interesting aside to the attack-and-repair game were warnings delivered to the Garrison Engineer (GE) , Srinagar, through leaflet drops by Sabres. The GE was warned not to repair the runway, else his house would be bombed! The leaflets were inserted in the speed brakes and were released through a momentary pip, just after the actual bomb release – a dicey prank indeed.
[2] PAF was flying two versions of the Sabre in the 1971 War - the North American F-86F and the Canadair Sabre Mk-6 (ex-Luftwaffe). The F-86F model that equipped No 26 Squadron had a markedly low-powered engine, which did little to help sustain speed and turn rates in combat.
[3] The Gnat Leader was briefly observed by Changazi at a higher altitude than the rest and, flying reciprocal to the direction of the engaged fighters. He was not seen again by any one.
[4] Flg Off Kotliezath P Muralidharan of No 20 Squadron was shot down on 4th Dec 1971, following a raid on Peshawar airfield.
[5] Contrary to IAF’s citation for Sekhon’s award, none of the Sabres was hit during the dogfight.