Post-haste summons for volunteers found an eager band of sixteen PAF fighter pilots on their way to the Middle East, in the midst of the 1973 Ramadan war. After a grueling Peshawar-Karachi-Baghdad flight on a PAF C-130, they were whisked off to Damascus by road. Upon arrival, half the batch was told to stay back in Syria while the rest were earmarked for Egypt. By the time the PAF batch reached Cairo, Egypt had agreed to a cease-fire; it was therefore decided that they would continue as instructors. But in Syria, it was another story.


The batch in Syria was made up of pilots who were already serving there on deputation (except one), but had been repatriated before the war. Now they were back in familiar surroundings as well as familiar aircraft, the venerable MiG-21. They were posted to No 67 Squadron, Alpha Detachment (all PAF). Hasty checkouts were immediately followed by serious business of Air Defence Alert scrambles and Combat Air Patrols from the air base at Dumayr near Damascus.

Syria had not agreed to a cease-fire, since Israeli operations in Golan were continuing at a threatening pace. Israeli Air Force missions included interdiction under top cover, well supported by intense radio jamming as the PAF pilots discovered. The PAF formation, using the call sign ‘Shahbaz,’ was formidable in size – all of eight aircraft. Shahbaz soon came to stand out as one that couldn't be messed with, in part because its tactics were innovative and bold. Survival, however, in a jammed-radio environment was concern number one. As a precaution, the Pakistanis decided to switch to Urdu for fear of being monitored in English. Suspicions were confirmed during one patrol, when healthy Punjabi invectives hurled on radio got them wondering if Mossad had recruited a few ‘Khalsas[1]’ for the job! 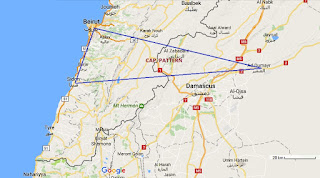 fter several months of sporadic activity, it seemed that hostilities were petering out. While the Shahbaz patrols over Lebanon and Syria had diminished in frequency, routine training sorties started to register a rise. Under these conditions it was a surprise when on the afternoon of 26th April 1974, the siren blasted from the airshafts of the underground bunker. Backgammon boards were pushed aside and the coffee session was interrupted as all eight pilots rushed to their MiGs; they were airborne within minutes. From Dumayr to Beirut, then along the Mediterranean coast till Sidon, and a final leg eastwards, skirting Damascus and back to Base – this was the usual patrol, flown at an altitude of 20,000 ft. The limited fuel of their early model MiG-21F permitted just a 30-minute sortie; this was almost over when ground radar blurted out on the radio that two bogeys were approaching from the southerly direction ie, Israel. At this stage fuel was low and an engagement was the least preferred option. Presented with a fait accompli, the leader of the formation called a defensive turn into the bogeys. Just then heavy radio jamming started, sounding somewhat similar to the ‘takka tak[2]’ at our meat joints, only more shrill. While the formation was gathering itself after the turn, two Israeli F-4E Phantoms sped past almost head-on, seemingly unwilling to engage. Was it a bait? 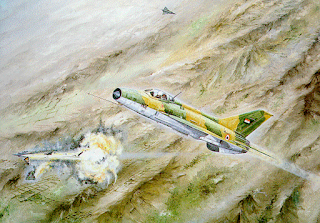 Flt Lt Sattar Alvi, now the rear-most in the formation, was still adjusting after the hard turn when he caught sight of two Mirage-IIICJ zooming into them from far below. With no way of warning the formation of the impending disaster, he instinctively decided to handle them alone. Peeling away from his formation, he turned hard into the Mirages so that one of them overshot. Against the other, he did a steep reversal dropping his speed literally to zero. (It takes some guts to let eight tons of metal hang up in unfriendly air!) The result was that within moments, the second Mirage filled his gunsight. While Sattar worried about having to concentrate for precious seconds in aiming and shooting, the lead Mirage started to turn around to get Sattar. Thinking that help was at hand, the target Mirage decided to accelerate away. A quick-witted Sattar reckoned that a missile shot would be just right for the range his target had opened up to. A pip of a button later, a K-13 heat-seeker sped off towards the tail of the escaping Mirage. Sattar recollects that it wasn’t as much an Israeli aircraft as a myth that seemed to explode in front of him. (The letter ‘J’ in Mirage-IIICJ stood for ‘Jewish,’ it may be noted.) He was tempted to watch the flaming metal rain down, but with the other Mirage lurking around and fuel down to a few hundred litres, he decided to exit. Diving down with careless abandon, he allowed a couple of sonic bangs over Damascus. (Word has it that the Presidential Palace wasn't amused!) His fuel tanks bone dry, Sattar made it to Dumayr on the vapours that remained.

As the other formation members started to trickle in, the leader, Sqn Ldr Arif Manzoor anxiously called out for Sattar to check if he was safe. All had thought that Sattar, a bit of a maverick that he was, had landed himself in trouble. Shouts of joy went up on the radio, however, when they learnt that he had been busy shooting down a Mirage. The Syrians were overwhelmed when they learnt that the impunity and daring of the Pakistani pilots had paid off. Sattar was declared a blood brother, for he had shared in shedding the blood of a common enemy, the Syrians explained!

Sattar's victim Captain M Lutz[3] of No 5 Air Wing based at Hatzor, ejected out of his disintegrating aircraft. It has been learnt that the Mirages were on a reconnaissance mission, escorted by Phantoms of No 1 Air Wing operating out of Ramat David Air Base. The Phantoms were to trap any interceptors while the Mirages carried out the recce. Timely warning by the radar controller (Flt Lt Saleem Metla, also from the PAF) had turned the tables on the escorts, allowing Sattar to sort out the Mirages. 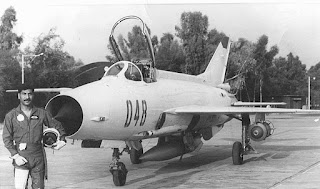 The success of Shahbaz over Golan is testimony to the skills of all PAF pilots, insists Sattar, as he thinks any one could have got the kill had he been ‘Shahbaz-8’ on that fateful day. The Syrian Government awarded the Wisam al-Shuja'a to all the formation members. Additionally, Sattar and Arif were admitted as ‘knights’ (al-faris) in the coveted Wisam al-Istehqaq al-Suriya, one of the country’s highest awards for 'honourable service and devotion'. The Government of Pakistan awarded Sattar and Arif with a Sitara-i-Jur’at as well. Sattar, an epitome of a fighter pilot, befittingly went on to command PAF’s elite Combat Commanders’ School and the premier PAF Base, Rafiqui. Many a fighter pilot trained by Sattar would swear by his audaciousness in the air. Even today, crew room lore persists that fighter pilots don’t come any bolder!

[1] Sikhs call themselves ‘khalsas’ or pure.
[2] The noise made by cleavers as the meat is chopped while being cooked in large metal pans. ‘Takka tak’ is also the widespread name of the meat delicacy.
[3] The identity of the pilot and his Unit has been obtained from US sources that prefer to remain unidentified; absolute confirmation of this detail is, therefore, not claimed.

although i read this many years ago , i must state that you have done a great service to aviation history.i hope that your research will benefit many.May God be with you in this very defective,imperfect and hopeless world.

i am amazed i was not knowing about this Knight.
Israel has occupied a large area of this land Golan hieghts. The two countries are having bitter times on this issue.