'Sherdils’! The romantic aura surrounding the PAF Academy aerobatics team is something real and exalting. Made up of instructors of the Basic Flying Training (BFT) Wing, ‘Sherdils’ seem to be a shade above the squalor of ‘patters and demos’[1] when they take to the air. Any one who has seen the ten-minute spectacle is bound to agree about one thing – it is technically superb and aesthetically pleasing.

The T-37 four-shipper first flew on 17th August 1972, after trials of candidate instructors were completed in a couple of sorties. The haste was typical of decisions of the time, when the Chief of the Air Staff asked the Academy Commandant to form a team and give him a demonstration at Peshawar. Wg Cdr Imtiaz A Bhatti, SJ, the 1965 War hero who was the Officer Commanding of Cadets’ Wing, had been tasked to select his wingmen and lead the team. The pioneering members were Flt Lt Aamer Ali Sharieff, Flt Lt A Rahim Yusufzai and Flt Lt Niaz Nabi, the latter becoming a most durable master of the ‘slot’ position. The initial performance met the CAS’ approval and the team was tasked to perform at air displays and firepower demonstrations for dignitaries, including Heads of State and military delegations. Soon after the inaugural display Bhatti got posted out, but the team was lucky to be led by another highly-qualified instructor, Sqn Ldr Bahar-ul-haq. Bahar went on to refine the display routine on lines of ‘Red Pelicans’, the aerobatics team of RAF College, Cranwell where he had been on an exchange tour. ‘Tweety birds’ have continued to be the star performers at PAF air displays.

The type of formation and sequence has virtually remained the same since the team’s inception – line astern to diamond formation during a loop, then clover-leaf, steep turn, barrel roll and finally, the breath-taking bomb-burst. The number of aircraft was increased from four to six in 2003, although the power reserve for position-keeping by outer wingmen has been found to be wanting in manoeuvres like the barrel roll. 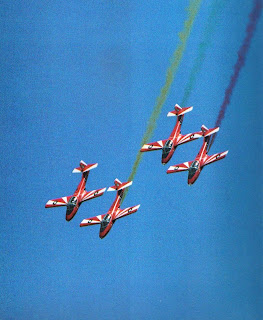 Initially the team had no name, which was rather unusual. The personal call sign of the leaders also denoted the team; it flew as ‘Sherdils’ for the first time on 19th September 1974. Appreciating the important quality affecting display aircraft ie, appearance, the T-37s were painted all-red. However, maintenance of the red-painted aircraft without the costly polyurethane coating became a problem. The team reverted to the all-metal finish, with only the nose, wing tips and tail painted day-glow orange. In 1980, with the induction of six ex-USAF T-37s, which were polyurethane-coated all-white, ‘Sherdils’ became a logical choice for a new titillating appearance. The dramatic ‘sunburst’ paint scheme was adopted, red rays on an all-white background. Coloured smoke has been used to enhance the aesthetic qualities of the formation; smoke trails give the impression of multi-coloured ribbons twirling in the sky.

The team went 'international' for the first time under the leadership of Wg Cdr Munawar Karim, Officer Commanding BFT Wing at PAF Academy, when six-ship 'Sherdils' performed at Al-Ain Air Show on all four days from 26-29 January 2007. Munawar also led the team in a rare performance over the sea off Manora during an international defence exhibition Karachi in November 2008. It harked back to the days of PAF's first jet (Attacker aircraft) team 'Paybills,' that used to perform over the sea during the early fifties.
No aerobatics team is without mishaps and, ‘Sherdils’ are no exception. On 8th October 1978 during a practice session, the dashing team leader Flt Lt Alamdar Hussain went down in a mid-air collision involving his slot man. He was posthumously awarded the Sitara-i-Basalat.

The story of ‘Sherdils’ would be incomplete without a tribute to its perennial member, the redoubtable Aamer Ali Sharieff. First as a Flight Lieutenant and then as a Wing Commander, he has the distinction of leading the team in the maximum number of performances spanning many years. Word has it that only his elderly spine, though not his spirit, kept Air Vice Marshal Aamer from becoming leader of the ‘Sherdils’ yet again, when he was the Air Officer Commanding at the Academy!

Team work is the hall-mark of ‘Sherdils’. Precise flying, sharp reflexes and sheer hard work go into each sortie. A ‘Sherdils’ display depicts mastery of machine, mastery indeed, over space, time and life itself.

To twirl, pounce…pounce and twirl…
‘Tis but a scheme to keep the blood on the swirl _____ IQBAL[2]


© M KAISER TUFAIL
This is an updated version of an article that first appeared in Shaheen - Journal of the PAF, Summer 2001 issue.

Kaiser Tufail said...
This comment has been removed by the author.
13 January, 2010

can we see a video of sherdils performing on this space?

I would love to have pictures and videos on this blog but just don't have the time to get down to it. Good idea, will see if it can be done.