Reliving the Past - Veterans Fly the F-16

A call from the Vice Chief of Air Staff asking me if I wanted to fly the F-16 got an immediate positive response, notwithstanding the fact that I had last flown the F-16 three decades ago. The stated objective was for a few retired veterans to assess the capabilities of the much modified fighter, as well as its young pilots, from a ‘then and now’ perspective – a sort of evaluation by independent auditors.  It seemed like a great idea coming from the Chief of Air Staff, and was certainly ‘out-of-the-box.’ 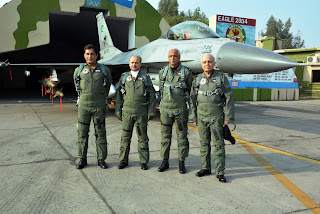 Four of us veterans (an Air Marshal, two Air Vice Marshals, and me, an Air Commodore) were flown to an F-16 Base in a special executive jet.  Soon after a smart welcome on arrival, we were huddled into the auditorium for a crisp mission briefing by the Squadron Commander of No 9 Squadron, Wg Cdr Yasir Shafiq.  The brief was rich in techno-jargon and fancy terms we had never heard before while flying the no-frills Block-15 version.  It was quite apparent that the tactics and employment methods had transformed significantly after the Mid-Life Upgrade (MLU) on the F-16s. We were to be introduced to Beyond Visual Range (BVR) intercepts, as well as Stand-off Laser Guided Bombing (dummy attacks) with the help of the Sniper Advanced Targeting Pod. Some flying time was also reserved for us to throw around the aircraft, and assess for ourselves the workings of our aging sinew and muscle.


Some time was spent struggling into our old flying coveralls that we had brought along, though the anti-G suits and helmets were new, as our old ones were either unserviceable, or could not fit over our none-too-slender appendages. When we were all garbed up, we felt an inexplicable transformation that made us feel like the coolest hot rods, no matter that we were all well-established sexagenarians.

Cockpit procedures and strapping up seemed routine, except for the almost arthritic inability to twist around and select the oxygen switch at the extreme rear of the right hand panel. Taxiing out in pairs, we lined up and did the engine run up checks. With the Squadron Commander in the lead, the first F-16 rolled for take-off, with us as No 2 following 10 seconds later.  Thoroughly excited as the five stages of the afterburner cut in an unbroken sequence, I was slammed against the seat as the aircraft roared away, with Sqn Ldr Sami at the controls in the front seat. As a special favour, the Squadron Commander had allowed us a rocket trajectory take-off, perhaps recalling my penchant for such astronautics from previous years. Exhilaration knew no bounds as we zoomed up to our exercise altitude, and split up to start an interception.
Instead of the single Radar Electro-Optical scope of the older version, the MLU aircraft has two Multi-Function Displays that can show radar and navigation-map data. The display was hard to interpret without proper ground schooling, as it had all kinds of target data available. Radar information from AWACs, ground radars and other formation members can be shared through data link, providing the pilot with a complete three-dimensional all-around coverage or the ‘God’s eye view.’ Situational awareness of pilots has never been better, but requires exceptional abilities to interpret the plethora of symbols and numbers usefully. Those skills were evident as Sami gave me a running commentary of the target (leader’s aircraft), as we ran through the intercept geometry. Used to shooting aircraft in visual ranges, I was amazed to learn that the fight was over not long after the aircraft appeared on the radar scope!  It had been ‘knocked’ out by a simulated BVR missile far beyond the eyes could see. The fire control computer was constantly providing information on the shrinking and expanding ‘dynamic launch zone’ as the target tried to out-turn the missile, which of course, was a futile effort.  If somehow, an enemy aircraft were to sneak into visual ranges, the radar-coupled helmet-mounted sight would require the pilot to just look at the target and press the missile launch button.  Instead of having to manoeuvre the aircraft like old times, one ‘dirty look’ by the pilot can do the needful.  The 20 mm Vulcan cannon remains a backup weapon and can discharge a fusillade at a ripping rate of 100 rounds per second.  I was doubly convinced that coming out alive after a hostile encounter with the MLU F-16 would be a miracle, so this is a beast best avoided by any adversary.

Demonstration of a dummy attack against a ground target with the Sniper electro-optical pod was the next item on the agenda. The Sniper pod allows aircrews to detect, identify and engage targets outside the range of most enemy air defences. It also allows engagements beyond jet noise range for counter-insurgency operations.
The pod incorporates a high definition Forward Looking Infra-Red (FLIR) seeker, as well as visible-light HDTV, laser spot tracker, laser marker, video data link, and a digital data recorder. The pod’s FLIR allows observation and tracking through smoke and haze, and in low light or no light conditions. The CCD camera supports the same operations in visible light for most daylight conditions.

It being a hazy day, FLIR mode was selected, and a target was identified and immediately tracked. Zooming in from far-off ranges helped resolve the target down to fine details that were unimaginable with the older ATLIS pod, that we had flown in the eighties. More importantly, the standoff range from the target has improved considerably, and targeting can be done safely from further off. The video of the target can be shared by formation members or army ground liaison staff in real time through data link. Sensor fusion is the key to this lethal game, and this could not have been more evident during the slick attack sequence we went through.
Time came for throwing the aircraft around, so the leader of the formation announced some mild tail chase. Not ready for the sudden onset of Gs, I strained my neck, which is a not an uncommon problem afflicting those who have stayed away from the F-16 for a while. The flight controls are driven by the same old right hand electric joystick, but the functions of the buttons on the stick (and throttle) have increased manifold. The facility and confidence with which Sami was handling the aircraft and its sensors was a marvel, and bespoke of his experience on the type that was past the 1,500 hours mark.
Landings were uneventful, and we taxied back to the aircraft shelters with ground crew eager to welcome us back after a unique experience. Soon afterwards, media teams emerged with their video cameras and mikes for short interviews regarding our experience. Here is what the veterans had to say:
Air Marshal Qazi Javed: “Fantastic! After 25 years, when you sit in an F-16, it is absolutely fantastic. The number of sensors these aircraft have is unbelievable; the situation awareness they provide is out of this world. I wish in our times, we had one-tenth of what we saw today. I wish the PAF good luck. Everyone is doing a fantastic job.”
Air Vice Marshal Hamid Khawaja: “It was a great experience. I returned after 20 years, which is a long time. The things I have seen today are very encouraging. The aircraft that I flew today has been modified so much – so much gadgetry – it makes you very happy to see that. I was very glad to see the pilots who are very comfortable with the aircraft. The level of experience of the younger pilots is very good too.”
Air Vice Marshal Faaiz Amir: “It reinforces my belief in the quality of today’s air force … more so the quality of pilots, although there is great improvement in the equipment as well. I was very pleased to see the competency of the pilots during the air-to-air exercise that we flew today. The technicians too are maintaining a very high standard of maintenance, and the aircraft are in very good shape. Godspeed to the Pakistan Air Force.” 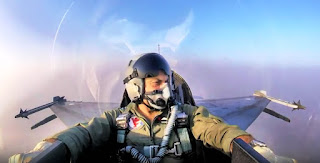 Air Commodore Kaiser Tufail: “I was flying the F-16 after 30 years, and the last I flew any fighter was in 2004. It was a wonderful experience and I really enjoyed it. This aircraft is absolutely different from what we flew three decades ago. It is a completely changed aircraft, full of avionics, full of gadgetry. However, the best part I liked was the professionalism of the pilots. Everyone is very dedicated. I think everything has transformed. It is a very powerful punch-packed air force. I am very impressed.”
© KAISER TUFAIL

Brilliant sir!
Hats off to Air force for maintaining such a lethal platform with utmost delicacy.

Your post is a perfect ode to the beauty of this impressive steel bird. The comparisons between the old variant and the modified F-16 was quite informative. As always, enjoyed your writing, Sir.

Nice post, Sir. Would be great if you all got a chance to fly in the JF-17 as well, and then share your thoughts. That should provice a good, independent comparison.

A bunch of us juniors saw it very much as a joyride stunt as the initial impression was to bring in former pilots who were flying overseas, but reading this blog somewhat changed our minds slightly.