The Balakot strike by IAF on 26 February 2019, and PAF’s ‘Swift Retort’ a day later, can be considered watershed events in modern aerial warfare. Though the IAF strike was beset with technical snags, including failure of stand-off bombs to guide themselves to the target due to faulty terrain elevation data, it was able to deliver the ordnance – albeit, in the pine forests – from as far as away.  Interception of ingressing IAF fighters threw up a new conundrum:  flying in their own territory, the hostile intentions of the fighters could not be read in advance and they could not be fired at, lest Pakistan be accused of unprovoked aggression.  After weapons release, the IAF aircraft rapidly turned back, and could not be chased for fear of violating international rules of engagement, as the release of bombs – and the breach of peace – was discovered only after some time. 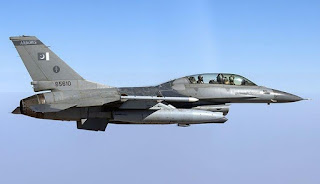 PAF retaliated within 30 hours of the IAF strike in broad daylight, and hit Indian military targets with stand-off bombs, staying well within own territory.  The sizeable strike package including its escorts, as well as the accompanying fighter sweep aircraft swamped the Indian air defence radar scopes, and the patrolling Su-30 aircraft were promptly vectored towards the PAF swarm.  Sooner the PAF strike fighters had delivered the bombs and turned around, the F-16s and JF-17s swept the skies, with very useful support from data-linked AEWC and ground radars, as well as from own formation members.  The pilots were glued to their multi-function displays streaming vital information and firing cues.  It was as if a whole squadron was playing a mass video game in the skies.  With excellent situational awareness, and the adversary in disarray, an F-16 fired a BVR AMRAAM (AIM-120C) at an approaching Su-30.  Whether the aircraft survived with nil or minor damage, or was hit critically remains moot, but the missile coming from nowhere and exploding in the vicinity resulted in complete panic amongst the IAF aircraft.  The patrolling IAF Mirage 2000s too seemed shell-shocked, and did not enter the fray; MiG-21 Bisons on ground alert had, therefore, to be scrambled. All this time PAF’s airborne and ground jammers were at work, and the IAF pilots and air defence controllers were thrown into total confusion. As one of the scrambled MiGs appeared on the radar scope of an F-16, another AMRAAM was fired, which shot the MiG out of the sky, the pilot surviving by a whisker and parachuting in to Pakistani territory.

The mission flown by the PAF was unique in many ways. The ground targets had been identified and prepared well in advance for exactly such an eventuality. The pilots had routinely practised flying in large packages, with ECM support and comprehensive situational awareness provided by AEWC aircraft. BVR missiles were used in the Indo-Pak scenario for the first time;  interestingly, close combat situations did not crop up for the classic dogfighters like PAF’s F-16 and IAF’s Mirage 2000, for instance.  It was manifest that BVR combat had taken precedence over close combat, if not rendering it completely obsolete.  A fighter in any future conflict must, therefore, have both long and short range missile firing capabilities, along with the associated sensors like radars, threat warning systems, and data links.  PAF could do well by urgently replacing its legacy fighters with ‘home-grown’ JF-17s (especially the upcoming Block III version), which have all the desirable attributes at an affordable cost.

For surface attack, stand-off capabilities were demonstrated by both air forces, and the safety of attacking aircraft was clearly highlighted. Accuracy of the attacks was, however, not achieved for different reasons:  the IAF suffering from faulty terrain data being fed into the bombs’ guidance system, and PAF being constrained by political considerations to prevent escalation by avoiding direct hits on military targets. In any case, the efficacy of stand-off weapon delivery was unmistakably validated, and it is certain that this is likely to be the mode of choice in any future conflict. An aircraft not having such a weapon delivery capability should be considered redundant for surface attack missions.

With IAF having the initiative, and PAF finding itself in a reactive mode, the latter’s full operational preparedness clearly saved the day. The whole operation was over within 48 hours, and deployment of strike elements of ground forces did not take place.  It became amply clear that air forces offer the best and swiftest means of retribution under a nuclear overhang, as the relatively slow positioning of ground troops to their operational areas is fraught with the possibility of being stymied, due to international pressure.  PAF’s tour de force will, thus, serve as a model for dealing with any future Indian military action that is punitive in nature.  PAF’s preparedness must continue to be refined, as IAF is expected to iron out the hitches that dogged its operations during the failed Balakot strike.

It is to be noted that after a disastrous showing by IAF on the 26th and 27th February, the Indian government unwisely decided to even the score by deploying – conceivably, for employing – Surface-to-Surface Missiles (SSMs) against targets in Pakistan.  Apparently, this measure was aimed at preventing further fighter losses at the hands of the PAF that was perceived by the IAF as being technically superior.  Exercise of the rash and senseless decision to deploy SSMs could well have been misconstrued by Pakistan, and a catastrophic exchange could have followed between nuclear-armed neighbours.  The Government of Pakistan, as well as its armed forces, should treat it as a textbook lesson in regional conflict escalation dynamics, and must remain cognisant of such developments in any future conflict.

With the Rubicon having been crossed after the Balakot raid, use of IAF fighters to compliment the usual artillery shelling across the Line of Control, is likely to be the new norm for intimidating Pakistan.  While PAF’s response is likely to be as swift as it was on 27 February, decision-making by the politico-military leadership may be complicated by a host of prevailing factors, both internal and external.  It is therefore imperative that meetings of the National Security Council and Joint Staff Headquarters are conducted regularly, and key decision-makers are kept posted about the developments so that there are no surprises.  The government must be fully aware that for the PAF to react as swiftly as it did in the recent skirmish, there will be a premium on prompt and smart decision-making.  It is also important to note that what starts as a single service response (by the PAF), could rapidly morph into a wider war; as such, over-dependence on the PAF could be fraught with risks, and a joint services response must continue to remain the ultimate objective of the Pakistani government to any aggression.

This article was published in Pakistan Politico, December 2019 Special Issue and in Defence Journal, January 2020 issue.
Posted by Kaiser Tufail

Kaiser, very precise analysis. While I must give credit to all those who made contributions in one way or the other, I would also like to add that given the small size of Pakistan ( relatively), we have our back against the wall as such, it’s matter of our survival.

Like always great piece of work. However, it will be much appreciated if you could do a scenario analysis of 26 and 27 Feb 2019 by including the elements of s-400 and Rafaele on Indian side and JF-17 block III on Pak side.

Excellent analysis and great job with ur pen, PAF is pak proud.

Great writing . Sir you have highlighted some very pertinent recommendations for the GoP.

A well thought and unbiased review

Good account of what happened. However, how does the new Rafale jet with BVRs change the dynamics of a future engagement? Hopefully there isn't one but given the history of the two countries...

A good read Sir. Thanks.