Theirs But to Do and Die

With the launching of the Indian counter-stroke at Lahore-Kasur front on the morning of 6th September 1965, neutralisation of the PAF should have been a logical first step. Inexplicably, the PAF was allowed to operate with impunity, which ultimately led to the petering out of 15 Division’s thrust towards Lahore. The IAF, it seemed, was bewildered by its Army’s guarded response and it took a costly twenty-four hours to come to grips with the situation. If only the IAF had struck Sargodha where over half of PAF’s fighter assets were housed, the General Officer Commanding, Maj Gen Niranjan Prasad may well have been having his avowed victory bash at Lahore Gymkhana that evening.

Strong on the heels of its air support to ground troops in Lahore, the PAF decided to follow up with pre-emptive strikes against Indian airfields and radars. The lynch pin of War Plan No 6 of June 1965, it called for neutralising vital elements of the IAF at the onset of hostilities. An ambitious plan that featured late afternoon (TOT 1700 hrs PST) strafing raids against four airfields and three radars was chalked out; it involved 46 aircraft from Peshawar, Mauripur and Sargodha. In the event, a host of factors militated against the plan; these included demands for air support to the Army, major air defence commitments and reduced aircraft availability due to battle damage and other unserviceabilities. Sargodha, which was to provide the bulk of the aircraft, had to have its fleet augmented with twelve Sabres and six T-33s from Mauripur. When they did arrive, it was too late for rectification of serious defects with some of the Sabres. Worse yet, the Sabres had been despatched unarmed and, it had been left to the Maintenance Wing at Sargodha to speed-load over 21,000 rounds in the 72 guns! Despite all the efforts, Sargodha was able to produce only twelve Sabres to target Adampur and Halwara airfields and Amritsar radar. The Station Commander Sargodha, Gp Capt Zafar Masud called up the C-in-C to inform him that only four aircraft each would be available for the three targets and suggested that the whole operation be delayed by 24 hours. This would allow preparation of the entire complement, besides giving a breather to the more experienced aircrew that had had a hectic day and were to lead again.

The exigency of wresting the initiative seemed to have become almost an obsession with the Air Staff. To a certain extent, the fear of IAF delivering the first blow was not totally unfounded and, it weighed heavily during the tense deliberations that afternoon. With the Peshawar Sabres all set to attack Pathankot, and Mauripur B-57s standing by to follow up with night strikes, the inclination to go ahead was further reinforced. Gp Capt Masud was therefore ordered to proceed without any more discussion.

Exasperated but not wholly discouraged, Masud called up the Assistant Chief of Air Staff (Operations), Air Cdre A Rahim Khan and urged that eight aircraft should be despatched against a single airfield instead of being split between Adampur and Halwara. Alerted by the Pathankot strike that had taken-off earlier, other airfields would have been swarming with interceptors; the meagre four-ship packages would thus have little chance of getting through[1]. Rahim discussed the idea with the C-in-C who remained adamant about attacking both the airfields. Once again, an ostensibly reasonable suggestion was turned down. The strain of the day’s proceedings was quite evident in the fateful decision.

Tribulations seemed no end for PAF’s star-crossed strike plan. When the eight aircraft finally started up at Sargodha, one was found to be unserviceable and there were no reserves. The final unserviceability of yet another Sabre just before take-off, was good enough reason to have concentrated against a single airfield, but the die had been cast.

Led by Sqn Ldr Sarfaraz A Rafiqui, with Flt Lt Cecil Choudhry as No 2 and Flt Lt Yunus Hussain as No 3, the three-ship formation of No 5 Squadron hurtled across into enemy territory in the fast fading light. Sqn Ldr M M Alam’s formation, also of three aircraft, which had taken-off ten minutes earlier, was returning after an abortive raid on Adampur. Four Hunters, themselves proceeding on a mission against Pak Army formations, had bounced them. Rafiqui was warned by Alam’s section to watch out for Hunters in the area.

At Halwara, IAF's No 7 Squadron equipped with Hunters had flown four strikes during the day. These were armed reconnaissance missions, which had little success in finding worthwhile targets. The fourth and last strike for the day was on its way to the precincts of Lahore, when it had encountered Alam’s formation near Tarn Taran. In that engagement Sqn Ldr A K Rawlley’s Hunter impacted the ground while Alam fired at him from astern. The remaining three Hunters aborted the mission and were taxiing back after landing, when Rafiqui’s formation pulled up for the attack at 1753 hrs (PST). 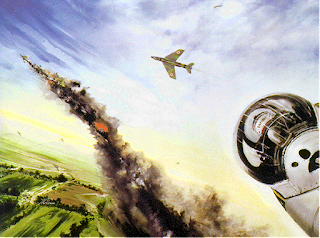 That evening, two pairs of Hunter Combat Air Patrols were airborne from Halwara – one from No 7 Squadron with Flg Off P S Pingale and Flg Off A R Ghandhi and the other from No 27 Squadron with Flt Lt D N Rathore and Flg Off V K Neb. Pingale and Ghandhi were in a left-hand orbit over the airfield when Rafiqui broke off his attack and closed in on the nearest aircraft. Rafiqui’s guns, as usual, found their mark. Pingale, not sure what hit him, lost control of his Hunter and ejected. Next, Rafiqui deftly manoeuvred behind Ghandhi and fired at him, registering some hits. Just then, Cecil heard his Squadron Commander call over the radio, “Cecil, my guns have stopped firing, you have the lead.” Cecil promptly moved in to lead, with Rafiqui sliding back as wingman. Ghandhi did not let go of the momentary slack and manoeuvred behind Rafiqui who was readjusting in his new position. Ghandhi fired at Rafiqui’s Sabre, but couldn’t get him because of a careless aim[2]. While Ghandhi followed the Sabre, Cecil bored in and shot him in turn, the bullets finding their mark on the left wing. Seeing his aircraft come apart, Ghandhi ejected near the airfield.

Running out of fuel as well as daylight, Rafiqui deemed it prudent to exit. Gathering his formation, he headed north-west, but with two more Hunters lurking around, a get away wasn’t easy. Happy on home ground, Rathore and Neb dived in to give chase. Rathore got behind Rafiqui who was on the right while Neb singled out Yunus on the left. Overtaking rapidly, Rathore fired from about 600 yards registering some hits. Closing in still further he fired again, this time mortally hitting Rafiqui’s Sabre. It banked sharply to the left and then dove into the ground near Heren village, some six miles from Halwara[3].

Meanwhile, Cecil looked around and noticing Yunus in trouble called a defensive break. Yunus responded, but for some incomprehensible reason pulled upwards, assisting Neb to catch up. Neb did not let go of the chance and fired a well-aimed volley, which Yunus did not survive. A puff of smoke rapidly turned into a sheet of flame as the Sabre disintegrated in mid air and fell to the ground. Left alone, Cecil fought his way out and dashed across after a nerve-racking encounter. 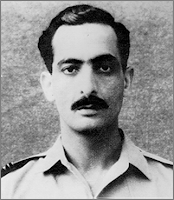 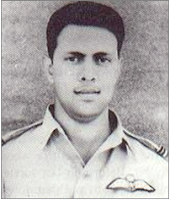 At Halwara, consternation was short-lived as Pingale and Ghandhi were promptly picked up from the airfield vicinity. At Sargodha however, things remained confused for some time. Two pilots of the Adampur strike had landed at Risalewala due to shortage of fuel, but for anxious hours, were considered as missing. Then there were conflicting reports about Rafiqui; according to one, he had somehow managed to make it across and was in a military hospital in Lahore. Perhaps the rumour was churned out as a palliative to lessen the anguish over the loss of the highly popular Rafiqui. Confirmation of Rafiqui and Yunus’s demise left Sargodha with a sentiment of culpability for having despatched them for a dangerous mission. Cecil recounted later that Rafiqui had accepted the mission orders unflinchingly, despite the odds. “It is a one way trip, I am sure about that,” Rafiqui had tragically guessed while waiting at the flight lines as the aircraft were being readied for the mission. “Why don’t you discuss it with the authorities?” asked Cecil. It was obvious that the significance of the mission was not lost on Rafiqui, when he replied, “It is an order, I can’t do that.” The answer was reminiscent of Tennyson’s famous refrain[4]:

For his bold leadership, Rafiqui was awarded the coveted Hilal-i-Jur’at, while Yunus and Cecil won a Sitara-i-Jur’at each. On the IAF side, Rathore, Neb and Ghandhi were awarded a Vir Chakra each for a successful effort at saving Halwara from a battering at the hands of a brave, but hapless PAF trio.

[1] Visual recce sorties by two Starfighters over Adampur and Halwara earlier in the afternoon are also certain to have given away PAF’s intentions.
[2] While Ghandhi claimed shooting down Rafiqui’s Sabre, the Indian Official History Indo-Pak War, 1965 does not credit him on grounds that the wreckage was nowhere in the vicinity of the airfield, as maintained by Ghandhi.
[3] Rafiqui’s body was found intact, thrown clear of the wreckage. This was confirmed by Flg Off Mohinder Vir Singh in his interrogation report while a POW, after being shot down on 8th Sep ‘65. According to him, the Flight Surgeon who had been to the crash site had related that the body of ‘a tall, brown-eyed PAF Squadron Leader’ had been found a few yards from the wreckage. An unconfirmed report states that the body was buried in accordance with Muslim rites. The wreckage of Rafiqui’s Sabre #52-5248 alongwith Yunus’s #53-1173 lies in IAF Museum at Palam.
[4] The Charge of the Light Brigade , Lord Tennyson (1854).

This article is an excerpted chapter from Air Cdre Kaiser Tufail's book, Great Air Battles of Pakistan Air Force, published by Ferozsons (Pvt) Ltd, 2005. It was also published in the daily newspaper, Dawn on 6 Sep 2007.

Rafiqui was a true hero. The saga of his bravery will never be part of dust.

This account will keep us remembering ill-fated raid conducted by the best & the highly acclaimed pilot of PAF Mr. Sarfarz Rafiqui, Younus Hussain & sole survivor Cecil Chaudhry
Their bravest act to keep on combating despite of being out-numbered has enriched the history of PAF & placed as 'Legend'

you will always be remember

We bow our heads for the secrificies of heroes.
May Allah SWT Grant them highest place in Jannah.
Ameen Sum Ameen.